The Bad Intentions bowling ball by hammer implies a sinister 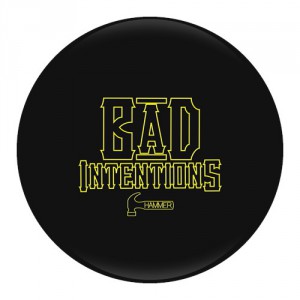 It might  be the next ball I add to my bag.

I did add this ball to my bowling arsenal, and enjoyed it for several years.

It was a ball I really liked and one of the smoothest balls I ever owned.

I tried the ball drilled pin under and changed it back to my pin over layout. The pin under seemed to be a bit to tame for a heavier oil condition.

Watch this video below and see what you think.

I am impressed with the smoothness of hook and continued power thru the pins, so I have to open a spot in my bowling bag for this one. The matte finish cover may be a bit strong for the house shot at my local alley, but I am sure it would work well on the sport shot.

I expect a start on the fresh oil of the house pattern will be possible, since the league is a medium- oil shot. But when the lanes start to dry,  I will need to switch to a ball with less surface.

I will try a pin under drill to allow for a bit of a move to play closer to the 12 board instead of say out 15 boards, or a polished surface for more length.

This Symmetrical Core is the same deal as the Bad Ass, which was the first R- rated ball from hammer. It was also the first symmetrical core that hammer produced since 2008-09.

What I find interesting is this block is a throwback to the old blue hammer core. It was undeniably one of my favorites years ago.

So,am I hoping for a return of my old blue hammer reaction? Yes, but not exactly. The path of this ball looks fairly similar, with the difference of better control of the hook coming off the break point.

The old Blue Hammer was and still is a ball that was well liked and enjoyed by quite a few bowlers. I still see a few bowlers using it to this day, and hammer still offers it for sale.

It is a ball that was good on the oil, but got wicked on the dry lanes and forced a move.

However, you could read the move coming,as the lanes broke down.And that is exactly what I liked about the old Blue Hammer. I just hope that same read is possible with the Bad Intentions.

I am impressed after watching several videos on the smoothness and consistent reaction of both the Bad Ass as well as the Bad Intention. Both balls hold the line nicely. The core block is delivering a smooth consistent path to the pins and delivering plenty of power through the pins.

The core is the same in both balls. Both balls are reactive solids, but the cover on the Bad Intentions is more aggressive. Hammer named this cover “Juiced Extreme”.

The difference from what I can see, is they left the ball dull and took the Factory Finish shine off the ball, hence the “Jucied Extreme” name. This allows it to start the hook sooner, and makes the ball a bit earlier off the break point.

Carbon is the stuff diamonds are made of. So, I am expecting this ball to have increased durability.They are offering a 3yr limited warranty with this ball, almost unheard of in the bowling ball industry.

I know I have had to replace balls almost every year, with the new high tech balls. It is becoming a fact that as they get games on them they just seem to lose that carry they had when they were like new.

My hope is that this ball will not disappoint, and with some warranty on the ball, maybe it will last a bit longer. I have heard players claim the ball does not seem to need the constant cleaning other balls do. I hope that is the case, because I for one get tired of the ball cleaning chore.

Find great products and prices at the#1 Online Store