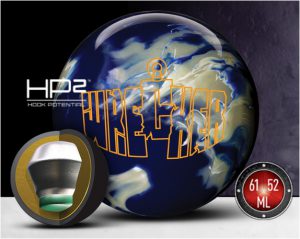 A bowling ball that remains available for 4 or 5 years now is a rare breed. But this Roto Grip line has been around that long and all the balls are still available at the time of this writing. I have never used the wrecker, but I own the Wreck-It, and the Wreck-Em from the Roto Grip Wrecker series.

My experience with the Wreck-It is a kind of love – hate relationship. When it works well it is a great ball, but the problem was, it didn’t happen for me until I decided to polish it. However, that’s a story for later in this review. Let’s start with looking at the Wrecker, Wreck-It and Wreck-Em side by side in a comparison chart.

This is the factory shined hybrid reactive Coverstock that started the HP2 Wrecker line. The success of this ball lead to the release of the Wreck-It and Wrecker-Em. The difference in all three balls is not really that great. It is mostly a change in Coverstocks using the Neutron core in all three.

In most reviews the biggest complaint about the Wrecker was that it got too snappy at times. Then, the Wreck-It was introduced. It gave a smoother roll and more controlled hook, but was still a bit angular. Along came the Wreck- Em Pearl  and it went a bit longer and finished smoother.

Ball Maintenance Guide for the Wrecker

I have listed Roto Grips resurface process instructions below. I personally keep the ball cleaned, and use my Deep Clean method to extend the life of the ball. It also allows me to extend the games played before resurfacing the ball.

Since I never used a Roto Grip Wrecker, I couldn’t comment on the performance from my own experience. Fortunately, I had the chance to see the ball in action on the oil pattern at our lanes. I 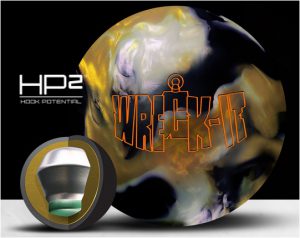 liked what I saw when I watched my bowling league partner throwing the Wreck-It. Whenever I get to see how the ball behaves on the league oil pattern, I can determine if I might want the ball. It looked like a nice smooth arcing ball. He was pleasantly surprised by the way the ball performed as well.  So, I got one.

A few others who had purchased the ball were saying the Wreck-it could handle a bit more oil. My intentions were to play slightly inside the 12 board to the 10 and get the action I wanted. As long as the oil was there it was fine, but after the oil got burned up I had issues. It just seemed a bit snappy for me.

Making the adjustment when the pattern broke down was a challenge from day one. Because the ball was just a bit to angular for me, I would try to change hand positions to correct it. Then, it finished differently at times because of it. Trying to get the ball to finish correctly was near impossible for me. It felt to me like “walking a fence rail”, with a very tight line. I was trying to guess where the ball would finish more often than not.

One thing I did like about the wreck-it, it did seem to handle oil a bit better. I am bowling on a medium to light oil shot, so a heavier oil pattern might be different. I can play the medium oil inside a bit more and the ball will come back to the pocket nicely. That was my original intention.

Ball Maintenance Guide for the Wreck-It

Maintenance is similar to the Wrecker, however note these changes.

Roto Grip® recommends using the suggested cleaner/polish daily. In addition, Roto Grip also recommends touching up the surface with only the final step every 20 games and resurfacing completely every 60-80 games.

The Wreck-Em is the first Pearl Coverstock in this line of  Roto Grip bowling balls. All three balls use the same solid neutron core from the Wrecker line. The surface is referred to as the 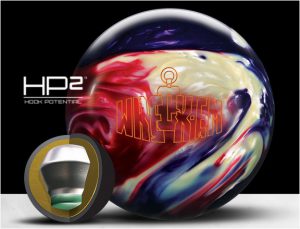 This ball is expected to go longer on the lane. It stores up energy and produces a strong roll and potent back-end reaction. It delivers a smoother and controlled action line, both on the mid-lanes and back-end.

I have also found it to be a smooth ball to throw straight down and in. Or, swing it some and the ball reacts smoothly to the pocket every time.

It is a medium to dry condition I play on, so throwing 12 board out to 8-10 worked well for me. I also played 9 board straight as well. It is still a strong finishing ball on the back-ends.

My layout is pin over at 1 o’clock to the ring finger. This drill gives me controllable hook and  the wreck-Em delivers some length on the lanes. I have been told that pearl balls may slightly differ in reaction from one to the other. Apparently it is likely to get some difference in the way the pearl is distributed from ball to ball.

However, the pearls are easier for me to make the adjustment later, when the oil breaks down. Over the years, they have been balls that have worked well for me. So far this ball is no exception. As long as I get it out on the lane, life is good. If you haven’t tried a pearl cover ball yet, maybe it’s time you did.

Ball Maintenance Guide for the Wreck-Em

Roto Grip recommends using a Micro Fiber Shammy during competition and cleaning your ball immediately after play. This will help prevent oil from soaking deeply into the cover. To keep your ball performing like a brand new factory ball, this is the sequence and products to do the job.

They recommend Storm Reacta Foam rubbed into the ball for 20 seconds, and then towel the ball dry.

Every 10 games, they recommend for polished balls, shining the surface with Storm Reacta Shine.

Every 10 games For dull balls scuffing the surface with Abralon pads to original surface grit.

For polished balls, every 30 games scuff with Abralon pads and polish with the Storm Reacta Shine.

After 60 games you are due for a resurface of the ball. If you have a ball spinner, follow the resurface instructions above.

If you want to increase the games between refinishing, I strongly recommend you try using some heat to sweat the oil from your ball. Bowling Ball Rejuvenator.

The Weck-It and Wreck-Em are the latest additions to my bag and so far I am pleased with them. I admit the Wreck-It was a bit touchy out of the box, but much better with some polish. If you are looking for another ball, here is a line that is still around.

I hope you found this article useful, and if you have any questions or comments, please leave them below.

Check Out More Great Deals at the #1 Online Store