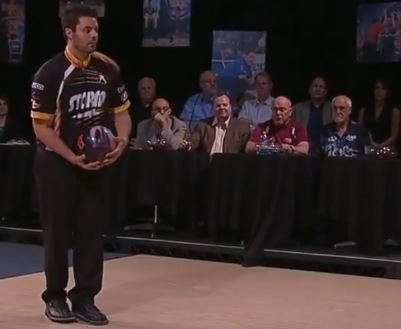 It seems fitting to start with one of the two handed bowlers that inspired many young bowlers to learn how to bowl two handed, Jason Belmonte.

Jason Belmonte is a Professional PBA bowler from Australia,  who was one of the first to introduce the two handed bowling style to the Professional Bowling Circuit. He joined the PBA in 2008 and has won 18 PBA tour titles, 9 majors and is a 4 time PBA player of the year.

Jason first started bowling incredibly at 18 months old, and had to use two hands to push the ball down the lane. At just 3 years old he was competing and at age 4 he won his first event. Jason has been responsible for many young bowlers emulating his bowling style.As a result more and more bowlers are becoming successful at the two handed style of bowling.

Thank You Jason For Those Great Tips

Here is Jason bowling yet another televised 300, number 21! 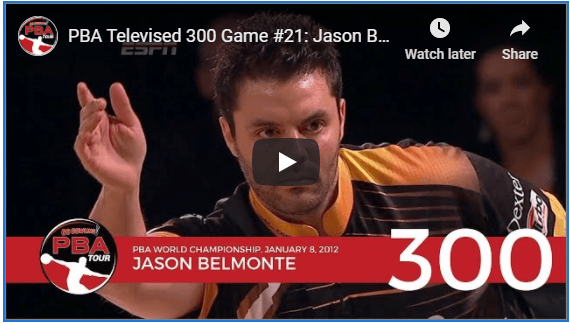 Here are some of the rising PBA bowling stars.

Anthony Simonsen – is an American Professional Bowler from Little Elm, Texas. He joined the PBA in 2014 at age 17, and has won 5 PBA Tour Titles and a European Bowling Tour (EBT) Tile.

At the young age of 22, Anthony has already made his mark in bowling in only 5 short years. This young man is talented enough to match the success of Jason Belmonte, and maybe more, time will tell. Everyone thinks Anthony is incredibly mature for such a young age.

Anthony Simonsen quit school in his freshman year and eventually decided to try a career in bowling. He joined the PBA at sixteen. He won the 2016 USBC Masters Final and became the youngest bowler ever to win a PBA major title. 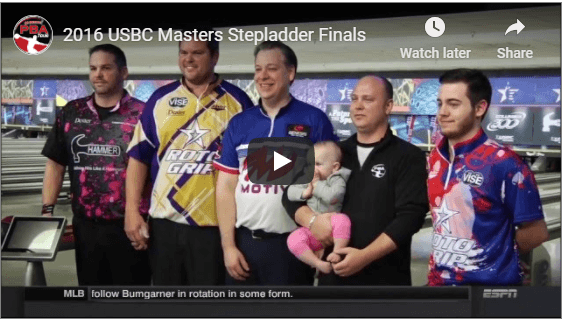 Anthony Simonsen bowls a huge game to clinch fifth seed for the PBA World Championship Finals and throws his last spare using only one hand. 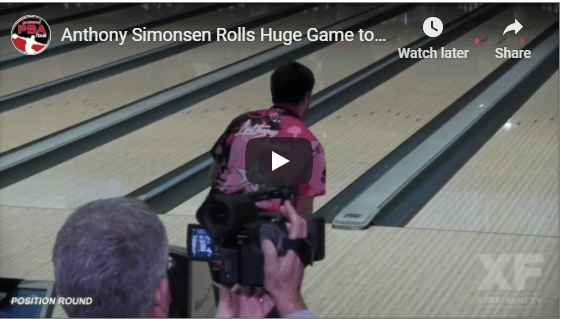 On June 16th 1979, Mike Aulby won the PBA National Championship. At the age of 19 years – 83 days, Mike became the youngest player ever to win a major title.

On February 14, 2016, Anthony Simonsen wins the 2016 USBC Masters Championship at the age of 19 years and 39 days, and becomes the youngest bowler to win a major title. 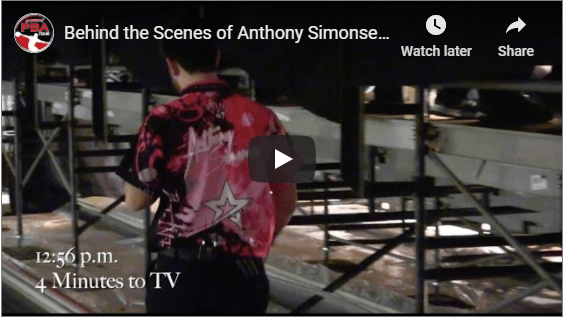 Here Anthony throws a back-up shot to win the PBA 2018 Gene Carters Championship. Occasionally, Anthony had thrown this back up shot in a few matches. He just recently had practiced the shot hoping to use it sometime in competition. Just a few days later, struggling on the right side, Anthony used his back up delivery, and won the match. He did it using a urethane ball. 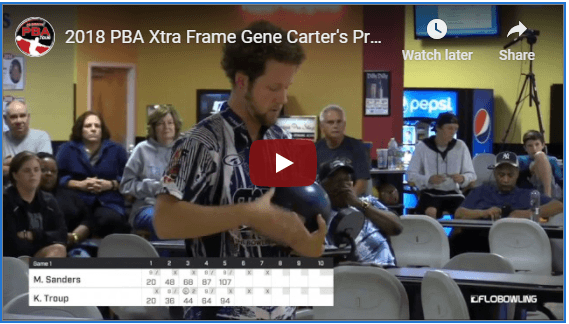 I think Anthony is a truly gifted athlete to be able to command two different delivery styles and win with both! I look forward to watching many  more exciting matches from Anthony.

He joined the PBA in 2014 and also bowls on the EBT European Bowling Tour. Jesper has won 7 PBA Titles( 1 major), and 6 EBT Titles.

He is the youngest player to win the 2016 PBA Tournament of Champions at 20 years old.

He also was the first player to have 5 titles by 21 years of age. Until, Anthony Simonsen joined him with 5 titles also at 21 years old. Jesper is 23, 1 year older than Anthony (22)

What Svensson likes to use – Storm/Roto Grip – Urethane 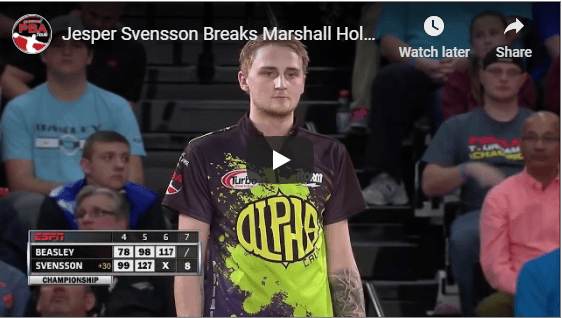 In the 2018 Tournament of champions Jespers arsenal was: 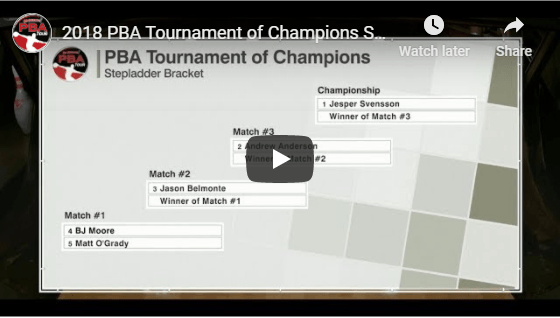 Jesper loses the final match to Matt O’Grady – 193 to 207. Matt beat two of the best two-handed bowlers Jason Belmonte and Jesper Svensson to win the 2018 Tournament of Champions. 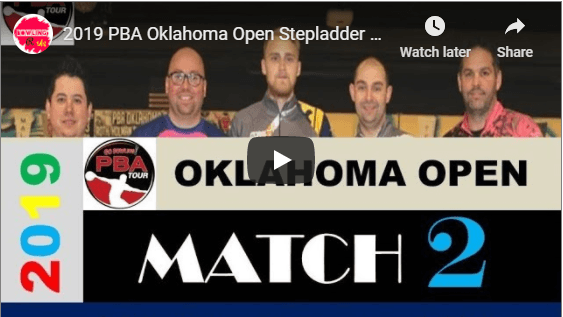 Jesper wins the stepladder and advances to the 2019 PBA Tour Oklahoma Open. That match is scheduled for Feb 10th, 2019

Kyle Troup – Is an American two hander from Taylorsville, North Carolina with 3 PBA Tour titles to his credit.

He joined the PBA in 2008, but mostly bowled PBA regional events. Recently Kyle has decided to bowl in more PBA tournaments. He won his first PBA tour title in 2015.

Kyle Troup gives us a few quick tips of his own. 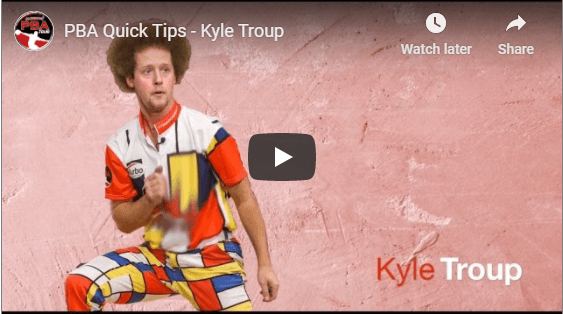 Osku Palermaa – was born in Espoo, Finland and presently lives in Gothenburg, Sweden. He has 13 EBT Titles, 5 PBA titles, and 6 International Titles.

Osku also uses a right handed dominant, two handed delivery bowling style, He is known for being a very strong bowler. His hard one hand shot for spares has been clocked at over 30 mph. That ball speed is one of the fastest in the world.

This is a great video highlighting some of Osku’s shots that demonstrate the advantage the two handers have with all that force they are generating. You be the judge. The pin carry they generate is phenomenal. 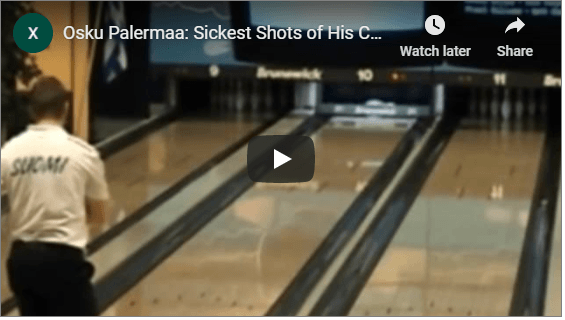 Osku Palermaa has a very smooth motion, slightly better than Jason Belmonte’s style. Both bowlers have a great style, Osku, in my opinion, just looks a bit like a Stroker, and less whip.

Don’t get me wrong, I think Jason Belmonte has a great style as well, and quite successful with his little skip, and whip. Jason style seems just a bit more like a Cranker when compared to Osku.

A Look at Osku in Slow Motion 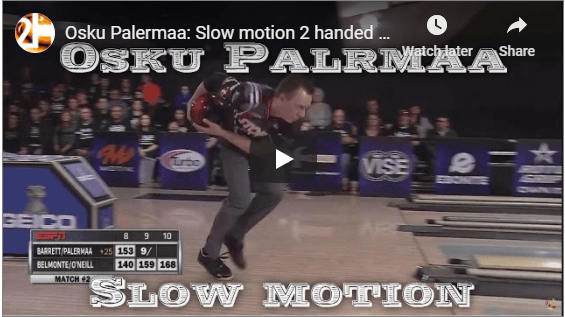 Sometime things don’t go great for the two handed bowlers. They have some bad days as well. Take a look at some of Osku’s rough moments. Even the pro bowlers are human! 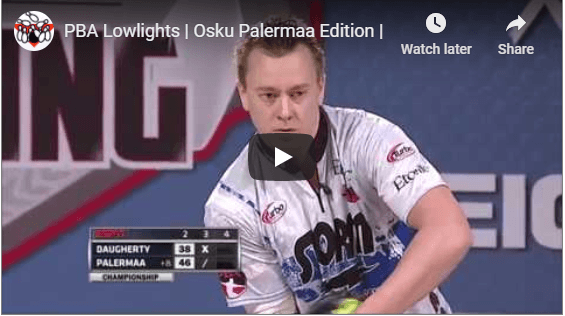 I hope you have enjoyed watching all these two handed PBA stars, and learned a few tips you can use to improve your game. Thanks for taking the time to read it. if you have any questions or comments, please leave them below.

Please visit my product pages for your future bowling needs. Thank you for visiting, please come back!