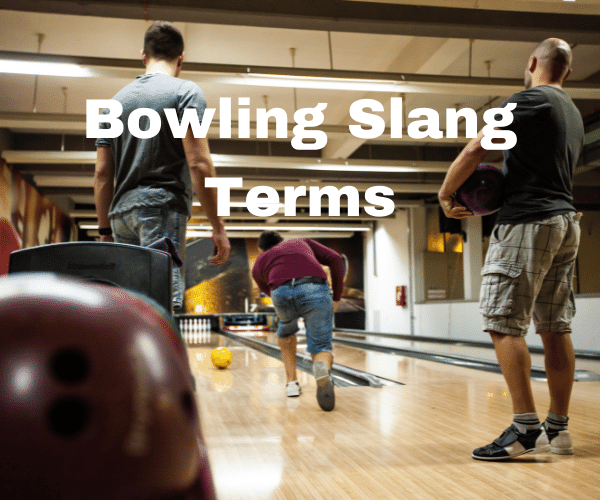 Bowling Slang Terms are something that all bowlers can relate too. The seasoned bowlers are constantly saying these strange words about another persons bowling. Maybe you have heard some of them and most likely had no idea what they were talking about.

Maybe you just heard one and you are searching to find out what it means. Well, you came to the right place. I am going to list all the bowling slang that I have heard over the years, and explain what it means. Let’s get started.

I think a good place to start is with the basics of the game of bowling. In ten pin bowling, the object of the game is to knock down all the pins, by rolling a ball down a lane or alley.

What are the ten segments in bowling called?

Frames are the 10 segments in bowling. Each bowler has two shots to knock all the pins down, except in the 10th frame.

If you get a strike in the 10th frame, you get 2 more bonus throws to knock down as many pins as you can. If you knock all the pins down with two shots for a spare, you get a bonus shot. But if you throw twice, and still have pins standing, your turn is over.

You only get 2 more shots if you get a strike or 1 more for a spare in the 10th frame.

Open Frame – A frame where you did not knock down all ten pins. You left some pins standing after two shots.

How many pins are used in bowling?

There are ten pins standing on the alley that you have to knock down.

What are the bowling pins made of?

Bowling Pins are made of smaller pieces of maple wood glued together. Then, the pins are shaped and covered with either nylon or a coating made by Dupont called Surlyn.

Maple is used because it is one of the only woods that can take the constant pounding and punishment. And in addition to making the pins more durable, using small pieces glued together allows for the weight of the pins to be kept more consistent.

What is the Proper Name for the bowling pins?

The bowling pins are historically know as skittles or kegels. This includes all the pins used in all the different bowling games including, ten-pins, five-pins, duckpins, and candlepins.

What is the slang term for pins

Dead Wood – Pins that are still on the lane or in the gutter after being knocked down.

How much does a bowling pin weigh?

Head Pin – The 1st pin closest to the bowler, that stands alone with all the other pins behind it.

Pin Rack – The pinsetter rack that resets the pins after each throw.

Pin Deck – The area where the pins sit on the alley.

Ten Pin – The pin in the back position of the pin rack on the right side of the alley next to the gutter.

Seven Pin – The pin in the back position of the pin rack on the left side of the alley next to the gutter. Also known as the “Mother-In Law“

5 Pin – The pin directly behind the head pin, in the center of the pin rack. Known as the “Kingpin” because it has pins all the way around it.

When you leave the 5 pin standing alone and all the other have been knocked down, it is also means “no sex” for you tonight. That is one reason it is commonly said “nobody misses the 5 pin”.

What is the approach in bowling?

The Approach – The area behind the foul line where you line up and use a 3 step, 4 step or 5 step delivery to throw the ball down the lane. The steps you use can also be referred to as the 3, 4, or 5 step approach.

Alley – Refers to the bowling establishment, or to the lane surface.

Anchor – The last man to bowl on the team, usually the best bowler. Also called the “hammer”

Arrows – Markings on the lane surface used for targeting the bowling line to get the ball to the 1-2 or 3-4 pocket.

Baby Split – A split with very little space between the two pins. Usually referring to the 2-7 or the 3-10 splits.

Baby The Ball – Throw the ball too easy. sometimes needed on very oily conditions to give the ball more time to hook,

Backends – The last 20 feet of the bowling lane. Bowlers like to refer to strong hooking balls as having a lot of backend. This means the ball hooks strong and hard as it get close to the pins.

Backup Ball – A ball that turns or hooks in the opposite direction. Left to right for right handers and right to left for left handers.

Bad Rack – Usually a pin is place slightly in the wrong place. Bowlers who spot it, can rerack the pins.

Ball Return – The channel that returns your ball to the Ball Rack located between the lanes, where all the balls remain till your next shot.

Why is 3 strikes in a row called a turkey?

In The 1700-1800’S typical prizes for Bowling Competition were baskets of food, and often it contained a Turkey.

Ball Track – Also called the “Line”. The path that the ball needs to travel to get to the pocket for a strike. It can also refer to the line on the ball where it is contacting the alley, leaving a track mark on the bowling ball.

What was the original “beer frame”

The 5th frame was originally always the Beer Frame. Any bowler that didn’t strike, or the lowest score bought a round of beers for the team.

Big Four – The two outside pins remaining on both sides of the lane. The 4-6-7-10 is also called “Grandma’s Teeth“, “Double Pinochle“, “Big Ears“, “Mule Ears” and the “Golden Gate“

Blind – The absent score for an absent player. Also know as a “Plug“

Blind Team – A team without any bowlers and all Plug or blind scores used to even up a league with an uneven amount of teams.

Blocked Lanes – Refers to an oil condition that is made easy to score by the oil blocking or holding the ball into a target line to the pocket.

Why is 4 strikes in a row called a Hambone?

Again , it goes back to the food awards. But, ESPN commentator Rob Stone is credited with calling 4 strikes in a row a “Hambone”.

Blowout – Leaving one pin and getting a nine count on your first shot.

Brooklyn – A strike with the ball entry point on the opposite side of the head pin. A Brooklyn strike for a right hander is the ball hitting on the 1-2 pocket side, instead of the normal 1-3 pocket hit.

Carry – Usually refers to the amount of pins your ball is knocking down, or “Pin Carry”

Carry Down – Refers to the oil that is being moved further down the lane and affecting the ball hook. “Oil Carry Down”

Cherry – With two pins left on the bowling deck, missing one and leaving the other one standing. Also know as a “Chop“

What is a game with all strikes and spares without any misses?

Dutch 200 – Alternating strikes and spares to end up with a 200 score. Also called the “Hard Way”

Foul – The most common foul is stepping over or past the foul line. This is where you get an “F” on your score. When you commit a foul, your score is erased, the pins are reset and you have one more shot. If you knock down all the pins, it does not count as a strike. You will be given a spare because you already threw one ball. Be careful, don’t foul!!

House Ball – The ball found on the ball racks to use when you don’t have your own ball. They are drilled with a standard drilling and are generally plastic balls in different weights.

Mark – Any frame that ends with a strike or spare.

Leaving one pin is also know as a “Tap”. Thus, 9 pin tournaments where you only need 9 to count as a Strike, are called “No Tap” tournaments.

Pocket – This is the area on either side of the head pin that gives you the best chance to knock down all the pins. this is what you are trying to hit with your first ball. 1-2 pins for left handers and 1-3 pins for right handers.

Pumpkin – A ball that delivers a weak hit and gets lousy pin carry.

Sandbagger – A player that deliberately bowls badly to keep his handicap low for leagues or tournament scores.

Tap – Leaving one pin on what appears to be a good Strike Ball.

Thin Hit – Also called a “Light Hit“. When the ball hits the head pin lightly. It is too light into the pocket.

Wire It – Finish with 3 Strikes in the 10th frame. Also called “Off the Sheet“

These are some Bowling Slang terms In league bowling

I have tried to include the most popular terms I have heard used in the Bowling alleys and at Bowling tournaments. The list is not complete, and there are more terms out there.

If you found some funny and it brought a smile, then I have accomplished what I had hoped for. Maybe you learned something new, and that’s a good thing too.

Thank you for reading my post. If you have any questions, please leave them below. I will answer ASAP

If you find some products you like great! Some of my links contain affiliate links, which I do make a small profit on, but at no additional cost to you. These small fees help to support this site and bring the content to you.

10 thoughts on “What Are Some Basic Bowling Slang Terms? [And Their Meanings]”