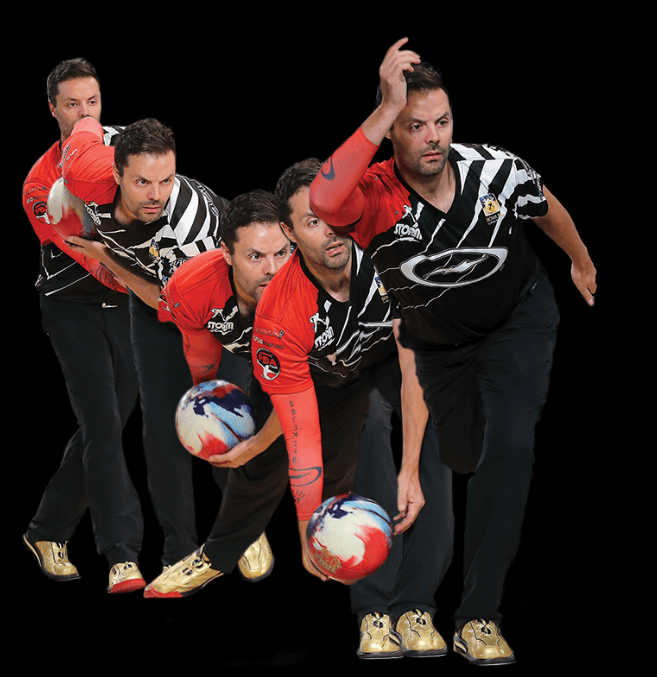 There are two people presently who dominate the sport of bowling using the two handed bowling technique. Jason Belmonte from Australia, and Osku Palermaa of Finland, are the two most successful two handed bowlers.

Osku Palermaa has been said to be one of the strongest bowlers in the world. He has be clocked throwing his spare ball with one hand at over 30 mph. His two handed strike ball is around 20mph.

Why is this two handed bowling technique becoming so popular with the younger bowlers all around the world? Because,it’s simply just exciting to watch!

The increased speed and extra revs generated, just explode the rack, and also generate more carry with the pins, which is basically enlarging the pocket for them. That is why this style of bowling is still very controversial.

If you look at each frame of the panorama of Jason, you see he actually delivers the ball with one hand. Look at the next to last image and you see Jason has his left hand clearly away from the ball.

See if you think the two handed technique has an advantage or not?

There is some bad blood between these two bowlers, from words that were exchanged at a prior tournament that adds some drama to this match! 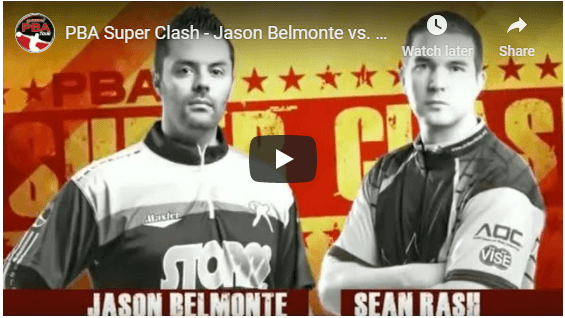 The two handed bowling technique has advantages and disadvantages. Let’s take a look.

Using the two handed bowling technique takes the stress of the one shoulder and distributes the weight more evenly throughout the body.

When they throw the ball for strikes,it does not require the use of the thumb.

In two handed bowling, the opposite hand acts like a thumb to help hold onto the ball. However, two handed bowlers will use the thumb inserted in the ball for spare shots.

The thumb, as we all know, causes a lot of problems in normal one handed bowling. Sometimes the thumb will stick causing the bowler to pull the ball, resulting in many errant shots. Or, the thumb will slip out too soon, causing the ball to drop prematurely. So eliminating the thumb altogether is a definite plus.

But probably the biggest difference by far using this technique, is the fact that this particular style produces more speed, more revs or turn on the ball and power while at the same time maintaining accuracy. This style actually reduces stress on the wrist, because of the help of the other hand.

The two handed bowlers would have a definite advantage on long and heavy oil patterns, just because they can generate all those revs, and strong hook on the ball.The heavier oil would also help in making ten pin spare less likely to hook to the inside too much, and cut down on misses there. The different PBA Oil patterns that the pro bowler encounter make for some difficult conditions

Using the 2nd hand makes the ball more stable and secure than conventional three-fingered bowlers who bowl without a thumb. The arm swing is not nearly as high as conventional bowlers, so the speed of delivery is created in faster footwork, more spine tilt, and rotation and a strong slide.

However, it is a fact that sometimes all those revs can be a problem, in particular on the shorter oil patterns the PBA bowlers, and sport league bowlers deal with that are basically similar to dry lane bowling.

Because of all the revs producing a strong hook, the two handed bowlers will use the thumb on certain spares. This is not a problem for the pros, but in the local bowling alley, all the extra balls become a problem sometimes.

But, could this type of bowling be harder on our bodies or not? The most controversial problem may be the stress put on the lower back because of lower degree of spine tilt and rotation for the ball delivery.

It is also involving much more movement of the entire body, so it requires a bit more  body flexibility and possibly increased stamina.

Two Handed Bowling Technique Can Anyone Do It

First thing to understand is that these two-handed bowlers are good athletes to begin with. They are younger and in very good health without the problems cause by aging. You must be flexible and have reasonable strength in the lower back and no lower back problems.

However, there seems to be some talk about it being easier on the fingers as far as arthritis pain. This could be of some interest to bowlers who have a problem with arthritic fingers. At least maybe a modified two handed style of sorts?

Using the other hand to stabilize the ball just may relieve the pressure in the fingers. Older bowlers may have too many issues with arthritis to attempt two handed bowling.

Senior backs and knees may already be too worn out to bend safely for that lower delivery necessary to roll the ball with two hands. Or maybe we just aren’t flexible enough anymore? Well, I know for a fact, that is a strong possibility with me!

A Comparison Illustrates the Different Styles of Each Bowler

If you watch Jason Belmonte, you will see he takes the ball back with two hands. Then, as he comes forward, preparing to roll the ball down the lane, he keeps one hand behind the ball. Jason’s left hand is holding the ball until he nears the foul line, and at the last second he pulls the left hand completely off the ball.

On the back swing,He will keep his elbow straight back and tucked inline with his body and keeping it inline straight behind the ball. Jason bends lower, and forward a bit more to generate more speed for the ball delivery.

Both Jason and Osku release the ball one handed, just as a right-handed conventional bowler. Both bowlers have a two handed bowling technique(approach) and they generate a ton of revs and power.However, they both remove the opposite hand before they release the ball.

One thing you may not know is that Jason has a condition that forces him to bowl with two hands. It is called Singular Chirophobia. An extremely rare medical condition that is characterized by the fear of using one hand.

Doctors told his parents that there was no cure. He learned to deal with it, and found his silver lining. He considers himself the best bowler on the planet! Ok, well I think Jason is pulling our leg a bit, take a look and see what you think?

Jason does admit on his FaceBook page this is all in fun, I thought you might enjoy it!

Some argue that two handed bowling is not real bowling. Therefore, it should not be allowed in competition. Why not? I think it is fine and also fun to watch the ball destroy the pocket and send the pins flying the way it does!

Most bowlers trying the two handed bowling technique, tend to attempt to spin the ball. Also, they throw the ball out onto the lane, which tends to make for an inaccurate shot. The best shots for accuracy are to roll the ball onto the lane and not try to add additional spin on the ball.

Overall, the basics are the same. Consistency shot after shot is the key to success with either style, conventional or two handed bowling. Either style requires the bowler to throw the same ball and deliver it in the same place time after time.

The oil patterns break down and require adjustment, just as they do for the one handed bowlers. Plastic balls are recommended for spares, because of the revs generating a lot more hook, the spares are a tougher also!

It looks like a lot of fun to try! So, I tried it. I quickly found out I could not generate enough ball speed. Flexibility and a good back are a must! it doesn’t hurt if you are still a young person as well!

So if you are in good shape, and don’t have any back problems, go for it!

Best Prices Anywhere Are Found At The #1 Online Store