Bowling without a thumb is a way for bowlers to create a tremendous amount of revs on the bowling ball.Now the question is, which is better thumb or no thumb? Some bowlers say you need the thumb for accuracy.I personally, have unsuccessfully tried bowling without a thumb. I don’t have big hands, and that makes it difficult for me.

I have bowled with three and even tried four fingers, which I had an extra finger hole drilled for my index finger. It’s been so long ago, I don’t even remember why I did that. But, I know that I more than likely did it because I wanted to try it. I figured it might help my bowling in some way, and maybe just because it sounds like fun.

That may be exactly why bowlers try to bowl without using the thumb.They do it, simply for the fun of trying it. Or they have seen somebody bowling quite well doing 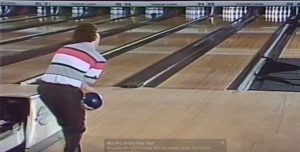 I remember one bowler who completely palmed the ball, he had no holes in the ball whatsoever. He held a 200 Avg, and I don’t remember him having any special spare ball either.

It was his style, he just wanted to bowl differently than everyone else. And it was fun! Although, it did help having large hands!

Why do You Care How I Bowl?

So what is the big deal anyway? Why worry about how a bowler likes to bowl, no matter how he bowls? Whether he uses a thumb and two fingers, no thumb or uses two hands? The game of bowling only requires we stay behind the foul line and try to knock down all ten pins. We can’t use anything heavier than a 16lb ball and no mechanical aids unless we are considered and approved as handicapped. Older conventional bowlers are bothered by the two-handed bowling style, and say it is not bowling.

But, using two hands is bowling and bowling two-handed is not really a newer style. A few bowlers were doing it back in the eighties and nineties. It just doesn’t fit into the one handed, thumb and two finger category of the bowlers and style they knew for years.

It really does not matter. What matters is what you like and what you are comfortable with.

Some Drawbacks to Thumbless Bowling

Thumbless bowling has limitations. The key thing to know is bowling centers try to get people to score well. They know if you score well, you enjoy it more, and chances are you will come back. It is good for business! So, they tend to put a friendly oil pattern down as their house shot and on league nights. This is referred to as a blocked shot. The oil is patterned in such a way to help guide the ball to the pocket.

When a hook ball is thrown, the ball skids early then hooks later to help give you that perfect angle for a strike.  What does this mean? Well, for bowlers without a thumb, and two- handed and bowlers who palm the ball, will score well on the blocked house shot.

But, very heavy oil patterns or dry lane conditions are a different story altogether.You can read more on ways to control your shot on different conditions in bowling tips and tricks.

The one handed thumbless bowlers will struggle with ball balance as the ball comes off their hands. If they begin to  lose the ball before they want to release it, it will cause some errant shots. However, they don’t have to deal with any sticking thumb problems!

When a very accurate shot is needed the bowlers using two or more fingers and a thumb, start to gain a small advantage. Also bowlers  throwing a straight ball, have a path that is unaffected by heavy or light oil, so they have advantage there over hook bowlers.

When we use the thumb, we have more control of the ball and can change speed, and  control the amount of hand we put into the ball. You can change the wrist position between using a cupped wrist, or flattening the wrist out.I suggest you read my article on “Cupping the Wrist in Bowling for More Hook” to learn more about using the wrist.

Possibly try to increase the height of your back swing, or keep it lower. You could decide to pull your fingers out slightly and only have the very fingertips in you finger holes, or even remove one finger or both.

When you are not using a thumb, (with or without fingers) you are restricted in a high back swing because you can’t hold onto the ball beyond a certain point in you back swing. You can’t hold the ball beyond a certain point. Bowlers with a thumb in the ball can swing the ball above their shoulders and even higher. I think a Good Bowling Arm Swing and follow thru is easier using a thumb hole to control the ball.

USBC Rules state you are allowed to remove your fingers: Holes for gripping purposes must not exceed five and are limited to one for each finger and one for the thumb. Not all fingers must be in all holes on every shot, but a player must be able to demonstrate they can use all the holes with the same hand.

When bowling without a thumb,your wrist is cupped and you are basically holding the ball between your arm and wrist. you can only go so high with your back swing before you lose control of the ball. So you are not able to gain any adjustment by not cupping the wrist.

Therefore,if you use a two-handed delivery, then you also restrict swing and wrist motion. However, the second hand allows for a ton of revs to be put on the ball, anywhere from 424- 514 or more. Jason Belmonte has hit a high rev rate of 580. So, its a trade off of higher revs and strike percentage, and less control by adjustment.

Two Handed Bowlers Use Their Thumb For Spare Shots

Is that the best of both worlds? Removing the thumb for strikes and then using your thumb for tough spares? It is hard to say, maybe? When we are young, we are more or less immortal, or so we think! And we abuse our bodies with reckless abandon. But as we get older, the abuse of our bodies take its toll and then arthritis sets in. Thumbless bowling puts more stress on wrist and finger ligaments, tendons and even bones in our wrists and fingers. We know it causes wrist problems.

Bowlers Who Used The Thumbless Techniques

Thumbless Mike Miller bowled without a thumb and may have started all the bowlers using the thumbless bowling technique. Mike may be the prime example of wrist problems caused by that style of bowling.

You certainly can’t argue with the fact that Mike Miller has 4 PBA titles and 55 300 games! He retired in 2003 after missing the cut by leaving a ten pin.

“I remember the day I threw my last game on Tour,” Miller said. “I left a ringing 10 pin to miss the cut and I told the guys, “I’ll see you later!” And I haven’t seen them since. That was it. I chose a different path for my family and my own health, and I’m fine with that.”

Bob Benoit was another notable bowler to use the thumbless technique, bowled the first ever 300 on TV, to beat Mark Roth 300-255 to win the Quaker State open in 1988. He is among 5 players to ever bowl 300 games on national television.

USBC Coaching Tips For Bowling Without a Thumb

The most important item for a bowler is maintaining balance throughout the approach and delivery. Balance and a good bowling arm swing will allow the fluid, continuous motion necessary in making a consistent shot, time-after-time. If a bowler is able to be balanced and make consistent shots then there is nothing wrong with the thumbless delivery.

With the fingers being well below the equator of the ball, the thumbless delivery is certainly a very strong shot as the bowler is able to generate a tremendous amount of revs on the ball because the fingers will stay in the ball longer.

In 2012 USBC announced that they would start teaching/coaching two-handed bowling. They actually enlisted Jason Belmonte as early as 2008 to teach their coaches. There is a lot of controversy about teaching the two-handed style, because of possible back injuries. This is because of the twist torque applied to the back. Using this technique for long periods,could cause golf type back injuries. Golf is very similar to the two-handed style in the torque transferred to the back and their are plenty of back injuries from Golf. Only time will tell because there just isn’t enough information about that particular style yet.

As long as your ball has the legal amount of holes, it doesn’t really matter how you deliver the ball, with or without fingers or thumbless. If you like doing it, learn the best ways to avoid injury, and prolong your body’s ability to use that style. It’s all about having fun.

If you have and comments or questions, please leave them below, and thanks for reading!

For the best prices anywhere go to the #1 Online Store

13 thoughts on “Bowling Without a Thumb”

Roll Back Deals-Save up to 60%