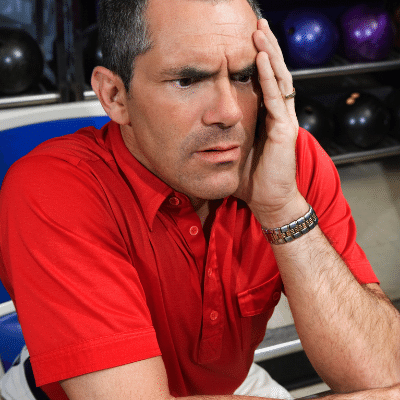 So you bowled terrible and had your worst bowling outing ever? You were embarrassed in front of all your bowling friends and buddies. Now, you have to go back next week and prove you really aren’t that bad. I know, it is painful, because our pride is hurt. And you know you are a better bowler than that. Now what? It’s very simple. You learn from all the things that went wrong and correct the things you can.  life goes on and you can’t change history. Let it go and move on.

So, What Can You Learn When You Have Bowled Terrible?

I have a bunch of excuses that are all legitimate, but I want to focus on things that I overlooked before my bad day happened.

I hadn’t bowled since the Covid-19 Pandemic shutdown in 2019. And I took last year off just because I didn’t feel safe enough to bowl during the pandemic. So, I knew I was terribly rusty. I hadn’t used my bowling skills in a year and a half. And the bowling center that was holding the local tournament, was a house I hadn’t bowled in for at least three years. Ok, so I had some reasons to expect a subpar performance.

I Didn’t Get To Practice On Those Lanes Beforehand

That particular bowling alley, had no practice available before the tournament took place. So, the next best thing I could do was practice at another alley and try to sharpen some of my bowling skills as best I could. But, it wasn’t enough to regain the muscle memory, and return my timing to it’s proper form. I made the decision to go and I went.

I had to deal with a bit more oil than lanes I normally bowl on.  If you have bowled on a heavier oil pattern, you know your ball goes longer, skids more and hooks less. That is exactly how the ball reacted to that surface. My ball is best suited to medium to light oil, so it did not react well.

Looking back in hindsight, I should have remembered the oil volume used in that house was always heavier when I bowled on those lanes. I knew that, but I forgot all about it.  Had I remembered that, I could have put a more aggressive surface on my ball before hand.

But, after not bowling  for a year and a half, my normal thinking about bowling preparation is not what it should be.  I never gave a thought to changing my ball surface. But I did want the ball as clean as possible, so I did give the ball a hot water bath and removed a lot of the oil from the coverstock. I was thinking that would be enough, but it wasn’t.

Some Problems When You Have Bowled Terrible

I was given the lead off position to bowl, and that is something I am not comfortable with. Nonetheless, I didn’t complain and thought of it as a challenge. Well, let’s just say it didn’t help me any. I did bowl on the wrong lane once, so clearly my focus was not on the bowling game. Focus is so important in any game of skill, and bowling is no exception.

When I started practice, I tried bowling the line I used while practicing in the other house, and the ball never touched the head pin. I am right handed and it hit to the right of the head pin. So I moved right and tried again, this time I missed the mark and had an errant shot to the left of the head pin. It was clear I was going to have issues hitting the target board I wanted to hit.

Normally, that is not to much of a problem, but this day was not a normal day. And I  was at a loss because I didn’t focus on the problem correctly. After I was done bowling, all the bowling knowledge magically can back into my head. Unfortunately, too late to do any good.

I should have tried to slow my feet down and my arm swing, but I didn’t think of that at the time. It seems like once I get uncomfortable, I have a hard time trying to recover and get myself back on track. I didn’t think logically about why things were happening the way they were. Believe me, I will try to improve on that when thing are not going well in the future.

2 Extra Dots Can Be Confusing

Trying to play the lanes properly was difficult for other reasons as well. One reason is because the lanes had an extra dot on the approach compared to my normal bowling center. I knew this and was aware of it, but it still makes things confusing. I use the approach dots to line my feet up in the proper position for delivering my strike shot and also when I attempt to shoot my spares. And that darn extra dot was always on my mind, distracting me and making me guess where I needed to be. I know I lined up in the wrong place more than once.

And after the dot was chosen, I still had the same issues with missing my mark when I lined up my spares. It was sort of Murphy’s Law in action, whatever could go wrong, did! My mental game was in shambles to say the least.

Making The 5-7 Split Was The Highlight Of My Game

Funny though, the bright spot of the day was making the 5- 7 split. I really can’t explain that one. It seemed like everything came together at that moment, and honestly I thought I was turning things around. But, the next shot was another miss of the head pin, leaving a 1-2-4-7 washout to deal with.

My release wasn’t good, and I noticed my ball had no revolutions or it was spinning going down the lane. That is something I needed to correct because with the high oil volume, I definitely needed the proper revs on the ball. But, trying to make sure I got a good release, sometimes made things worse. I would concentrate on my release, and hold on to the ball too long, causing another errant shot. When you only have three games to try to correct so many problems, it is impossible. It’s like a snowball effect that keeps compounding the problems.

I use an adjustable wrist support. In the practice sessions at the other alley with less oil, I had changed the settings for less hook because the ball was hooking too much. But when I bowled with the higher volume of oil, I forgot all about it. And I got less hook when I needed more.

So, Have You Bowled Terrible? Did You Learn Anything?

I know it is painful to bowl bad. And many people swear they are done bowling and are quitting. Somehow, they seem to show up the next week to try it again. But, I think if we take the time to analyze what happened and try to determine the cause, we become better bowlers for it. We are human and prone to make mistakes. If we keep making the same mistakes and expect different results, that is the definition of insanity. The only thing that is going to get different results, it correcting what we did wrong and do it differently the next time.

If you would like to share one of your bad days, tell us what you learned from your experience. Thank you for taking the time to read this far.

6 thoughts on “So You Bowled Terrible, Now What?”